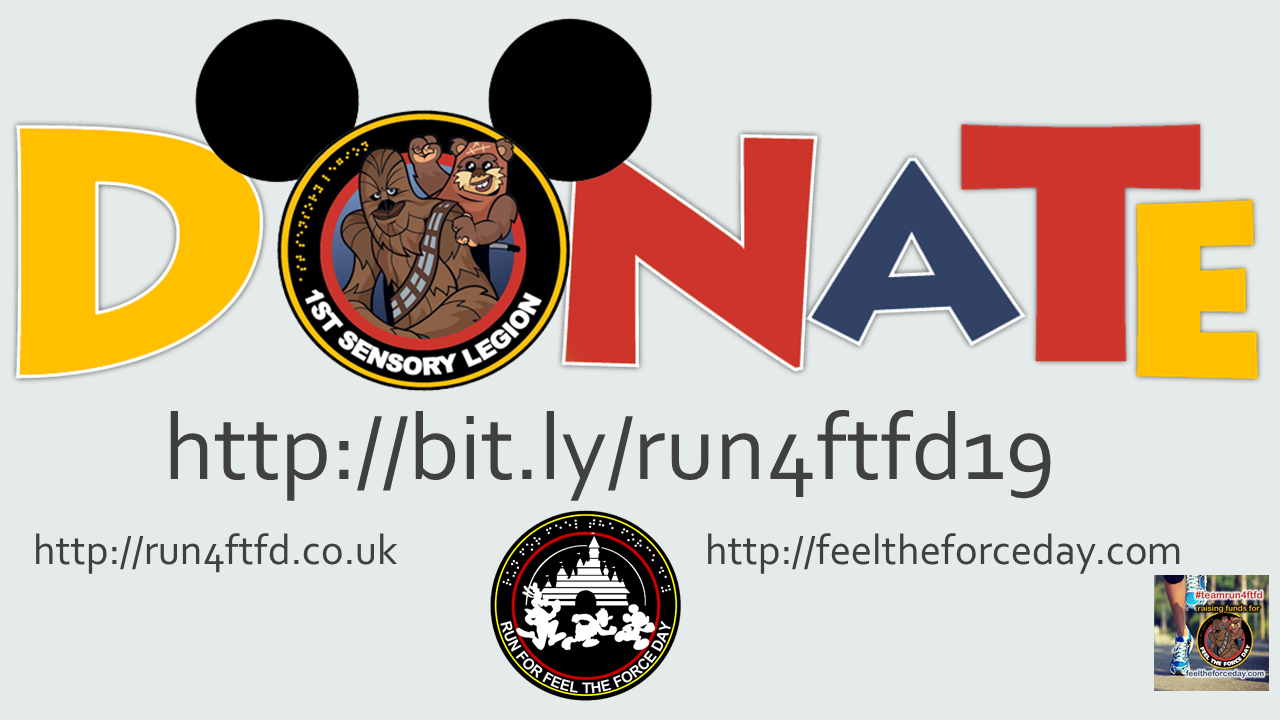 Here you can find our vlog / podcast for June 2019

As promised here is the transcript

Welcome to the Run 4 Feel the Force Day podcast

This is officially episode 3 – although episdoe 2 didn’t make the light of day – due to one thing and another ..
So news since we last spoke – today the 11th of June it is 100 days until this years 5k race! So not long now .. that 100 days will wizz past.

Bib sales officially launched in April and the 36k challenge and 5k sold out in a few hours. Sharon was lucky enough to grab her 36k bib in the chaos of the website crashing and the usual palava in the first hour they were on sale. Unfortunately the rest of the team missed out in the first round, but not to worry. A second bib sale where the next round of challenge bibs goes on sale very shortly. Middle of June so the rumour mill tells us – to be precise the 18th of June and it will be the last tranch of bib only sales before the event. Sam and the rest of the team are lined up and ready to grab their bibs on the 18th.
Healthy eating has started and so has gentle training. We are all on a low carb healthy eating plan as we are all a bit on the comfy side shall we say. Good progress is being made and hopefully we will all be a little less wide when we get to race weekend.

This years theme is adventures – and that is all really we have been told so far. There has been talk of a lion king or jungle theme as the Lion King and Jungle festival is currently running at Disneyland Paris until the start of race weekend, but as you can see from the picture here (I will descibe it for our visually impaired listeners) we see 4 images of Peter Pan, Baloo from the Jungle Book, Merida from Brave and Mickey and Minnie. So the adventure theme is very vague. More news is normally announce just before the medals are revealed and that usually happens early July, so hopefully not long to wait.

So why is running at Disney so special? Sam and I had a visit in March and we will share some of the fun with you …

The Expo .. where it all starts .. We go here to pick up bibs and register that we have arrived and this is the way to the coralls on race days. There has been a lot of work going on in this part of the park. New buildings and tents have appeared and there was talk that the current events arena would be retired this year, but it is still very much with us. We pass through those gates and on to the Expo .. and corals .. its always super packed with enthusiastic runners (well mostly). Its a busy place with merch, photo oportunities and a great buzz. It may not look very exciting on a windy dreary day but it will be come September.

The park entrance .. In the back ground you can see the Disneyland hotel which is the entrance to Disneyland park (also known as the Pink Palace), we run across this courtyard is all 3 of the races and although its not too busy here, its such a brilliant atmosphere running down here past the fountains with thousands of your fellow Disney family.

Main Street USA .. The only thing we really dislike about main street are the tram tracks .. they can be evil .. both Sam and I have had issues with them previously (we are both a little clumsy), but running towards to the castle is just magical. Spectators and cast members line the route and cheer you on as you go and it is just brilliant. The Disneyland cast memebers really do make the race magical ..

Lets head to Fantasyland .. There are lots of different routes the races take, but we normally always run though Fantasty land past the Castle and the castle stage .. where they put on shows and other entertainment. This buidling is the annual passport office .. where we have spent some time sorting out passes. There is normally a character stop near here on race days. And in to fantasyland we have the lovely its a small world .. it is traditional that you have to ride it.

Through the Castle .. On the 10k and half marathon in previous years we run through the castle. Past Lancelot’s carousel which is running on race days, across the courtyard on the lovely cobbles – which can get a little slipperly – past the sword in the stone – there are normally cast members here too chearing us on .. then we go up one of the sides and through the castle. Past the lovely christmas shop which is here all year, luckily everyone is going in the same direction on race days .. its a great feeling running through the castle and out the other side. For the half marathon there is normally a photo op in the middle of the main street roundabout too.

Adventureland & Pirates .. One of our favourite areas of the parks. Here we are passing the jolly roger and skull rock. If we are lucky there is a character shop here too. Captain Hook and Peter Pan are often seen loitering around these parts. Where there be pirates .. there be alson a Captain Jack Sparrow .. Onwards to Pirates of the Caribbean (my favourite ride in this part of the park).

Discoveryland ..Another great place to run through .. the rides are running and cast members are out in abundance. This area of the park is based on a Jules Verne theme and is very steam punk and is unique to the Disney parks. We have the Hypirion cafe on the left and in front of us here is Space mountain. With a nod to modern classics we have Eva and Walle here – which is a popular photo spot. And my favourtie bit of this section .. Star Tours, star traders and the meeting spot for starwars characters.
This gate here connects Fantasyland and Discoveryland and depending on the race route, we will normally run through this gate from one land to the other.

The finishline .. normally in the Studios park, this area will look drastically different if we run through this part of the park, this whole area is becoming marvel themed. Rock and Roller is getting an Iron Man facelift, the hideous armageddon is going and becoming a Spiderman themed ride, and lots of other marvel goodness is occuring in this corner of the park. The finish is normally at the endof this stip heading down towards the area by the studio stage.

We hope you enjoyed this whirlwind trip around the parks and update on what has been going on with the Run 4 Feel the Force Day team ..
don’t forget you can donate to help Feel the Force day by going to http://bit.ly/run4ftfd19

Simon & JJ from Feel The Force Day are on the radio / podcast.

Richard talk to Si & JJ, they are a local charity that puts on a Comic Con (although they have much more on now) for Disabled people. The event has a worldwide reach, is the only one of its kind in the world and has people flying in just for the convention. We talk to them about the beginnings, the trials and tribulations, how they get things done and also recent events that have been well publicised here in the East of England. All of this mixed in with some Space themed music! Enjoy.